A selection of Images

This message is only visible to admins.

Error: The 'manage_pages' permission must be granted before impersonating a user's page.
Type: OAuthException
Solution: See here for how to solve this error

Another date for your diaries also 23 November with Bath Camerata, the ever popular Messiah! Click the event details for more information and tickets: www.facebook.com/events/387875492140921/ ... See MoreSee Less

Our "About" story has been updated! :) check it out! (right hand side of the page!) ... See MoreSee Less

Tickets on sale for our Autumn Concert to be held on November 30th at 7.30pm. Tickets available online at www.eventbrite.co.uk/e/peace-on-earth-malmesbury-singers-concert-tickets-74755667213, from Malmesbury Abbey bookshop and choir members. More details on our event page: www.facebook.com/events/494107951370278/ ... See MoreSee Less

An Evening at the Opera

Our Winter concert took place Saturday 25 November 2017 in Malmesbury Abbey.  It was a departure from our usual Christmas concert due to holding it earlier in our calendar year than usual. 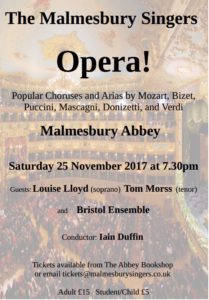 Malmesbury Singers and guest soloists soprano Louise Lloyd and tenor Tom Morss together with the Bristol Ensemble entertained the audience with a sparkling evening of operatic favourites on Saturday 25th November at 7.30pm in Malmesbury Abbey.

The programme, showcasing music by the operatic giants of the 18th and 19th centuries, feature overtures, choruses and arias from some of our best-loved operas, including Mozart’s ‘Marriage of Figaro’; ‘Madame Butterfly’ and ‘La Boheme’ by Puccini; ‘Carmen’ by Bizet; and Verdi’s ‘Aida’ and ‘La Traviata’.

“After our performance of Handel’s ‘Samson’ last year, I was inspired by the dramatic approach of our soloists to present a gala evening of opera in a concert setting, choosing well-known pieces from the repertoire that have a huge impact in their own right,” said Iain Duffin, musical director. “I am delighted that local artiste Louise Lloyd, who performed for us so movingly as Delilah in Handel’s ‘Samson’ in 2016, will once again take centre-stage, this time with Scottish tenor Tom Morss.”

“We also welcome back the Bristol Ensemble, which has a growing reputation as a high quality and adventurous orchestra. The Ensemble appears regularly in Bristol and across the South West and appeared on BBC television in their performance of Handel’s ‘Water Music’ as part of the Bristol Harbour Festival in July,” said Iain Duffin.

The curtain rises to the overture from Mozart’s ‘Marriage of Figaro’ and, after duets from this opera and ‘Don Giovanni’, the Mozart section ends with a wedding chorus from the ‘Marriage of Figaro’. We now turn to Italian opera, starting with a hauntingly tender aria from ‘L’Elisir d’Amore’ and ending with the spiritually uplifting Easter Hymn from Mascagni’s ‘Cavalleria Rusticana’.

The next part of the programme is on that greatest of operatic themes, “love.” We hear from the gypsy heroine Carmen in the Habanera and finish this section with the highlight of Puccini’s ‘La Boheme’ performed by our two soloists, Rodolfo serenading his tragic Mimi in one of the most moving duets of all opera.

The concert ends with a tribute to arguably the greatest composer of opera, Verdi, starting with one of the preludes from ‘La Traviata’, followed by the Anvil Chorus and the Chorus of the Hebrew Slaves , and culminating in the pomp and majesty of the Grand March from ’Aida’.

It featured “a great line-up of performers and a fantastic variety of music”, said Iain Duffin.  It was very well received by all who attended, with some very good reviews!

Any cookies that may not be particularly necessary for the website to function and is used specifically to collect user personal data via analytics, ads, other embedded contents are termed as non-necessary cookies. It is mandatory to procure user consent prior to running these cookies on your website.